Kuncoro |
Eukaryotes include fungi, animals, and plants as well as some unicellular organisms. Eukaryotic cells are about 10 times the size of a prokaryote and can be as much as 1000 times greater in volume. The major and extremely significant difference between prokaryotes and eukaryotes is that eukaryotic cells contain membrane-bound compartments in which specific metabolic activities take place. Most important among these is the presence of a nucleus, a membrane-delineated compartment that houses the eukaryotic cell’s DNA. It is this nucleus that gives the eukaryote—literally, true nucleus—its name.


Eukaryotic organisms also have other specialized structures, called organelles, which are small structures within cells that perform dedicated functions. As the name implies, you can think of organelles as small organs. There are a dozen different types of organelles commonly found in eukaryotic cells. In this primer, we will focus our attention on only a handful of organelles and will examine these organelles with an eye to their role at a molecular level in the cell.

The origin of the eukaryotic cell was a milestone in the evolution of life. Although eukaryotes use the same genetic code and metabolic processes as prokaryotes, their higher level of organizational complexity has permitted the development of truly multicellular organisms. Without eukaryotes, the world would lack mammals, birds, fish, invertebrates, mushrooms, plants, and complex single-celled organisms. (taken from http://www.ncbi.nlm.nih.gov/About/primer/genetics_cell.html) 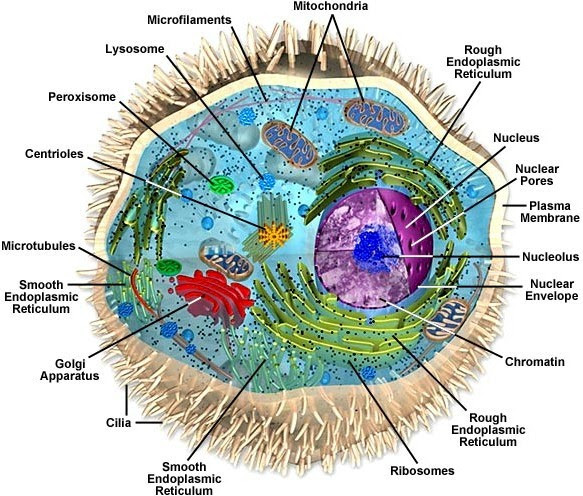